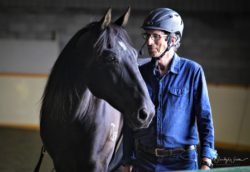 A holiday in Russell, Manitoba in November is sure to get you into trouble. That’s when I first met Bear five years ago. A handsome black foundation Tennessee Walking Horse. He was a bit high-headed and spooky, and had never been inside a barn or an arena. So of course, as novice horse humans, we bought him. 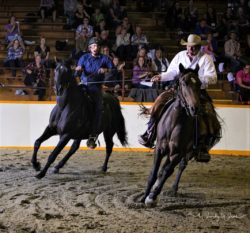 My fault entirely. And I wasn’t even really interested in horses then. We were in Russell at the TW Ranch looking for a horse for my wife, Patricia. Here’s how Bear won me over. Patricia had been studying Parelli with Todd Owens, and I’d watch her often. At the ranch there were games and obstacles set up, and while Patricia was looking at another horse, I thought I’d try the Figure-8 with Bear — I’d seen Patricia do that back home. Well, Bear impressed me by showing me how it was done.

At our barn in Uxbridge I watched each lesson Patricia and Bear had with Todd. To be honest, I was a little skeptical about this “Parelli stuff”. I’d ridden quite a bit as a young teenager, and I never did anything like that with a horse. But of course, I didn’t know what I didn’t know. 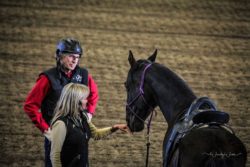 Bear and Patricia made good progress on the ground, but he was a handful in the saddle. And when Patricia found another horse, Bear became mine. And he and I began our journey together.

Right brained introvert. Go slow with him. Take the time it takes. Give him a chance to figure it out. These were some of the concepts Todd gave me that helped both Bear and me learn on the ground and in the saddle.

One day Todd asked me, “what did you learn from your horse today?” That got me thinking. Had I been paying enough attention to what Bear was saying? So I tried to really listen to him. And our relationship changed almost immediately. He had some definite opinions! And I discovered that he didn’t need me to agree with him. He just wanted to know that I had heard what he had to say. 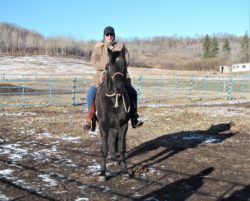 Bear and I have made some significant strides (pardon the pun) over the last three years. He’s become more left brain, quite confident, and curious. We have a great partnership, and he’s willing to try almost anything I ask of him – providing I ask properly!

Our success together is largely due to our Parelli training. Todd Owens gave me the tools I needed to start becoming the horseman Bear needed me to be. Don Halladay taught me that it was up to me to know when to use those tools, because, as he always says, “It depends…” Pat Parelli showed me that if I had the will, Bear had the ability. Linda Parelli brought focus to my tool kit, and that Bear appreciates the leadership that focus brings.

Most of all, through Parelli, Bear and I have learned to trust each other. And trust is what makes a great partnership.

Jim Applebaum started riding 5 years ago, at age 65. His horse Bear is a 15.3 15-year-old Foundation Tennessee Walking horse. They are working on their Level 3 Parelli skills.